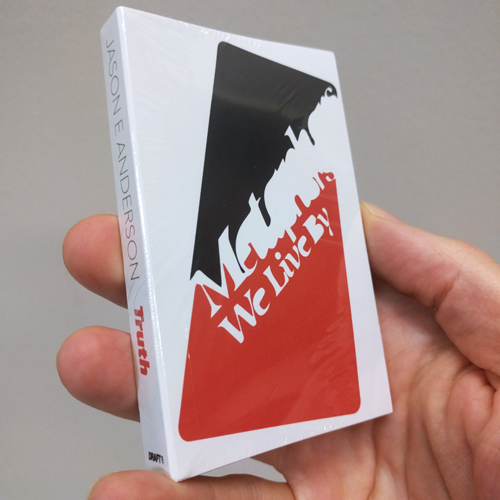 DRAFT is pleased to announce its first release in three years by offering Jason E Anderson‘s Truth, a 60 minute live performance released on tape. Performed and recorded live on February 11, 2017 at Jack Straw Studios in Seattle with Ian Halloran reading text from Metaphors We Live By (Lakoff/Johnson, 1980), Truth was initially conceived for Sonarchy Radio/KEXP.

The release of Truth marks Anderson’s first solo appearance for DRAFT. His prior recorded work under his given name has appeared on his own defunct label Make Jet Silent, Börft and Discriminate Music. Truth is Anderson’s most recent solo recording involving voice and synthesis, a common thread found within his work over the last 5 years. Truth was created using a computer running supercollider to send control voltages to a modular synthesizer from an audio interface, while Ian Halloran read from ‘Chapter 24: Truth’ of Metaphors We Live By into a microphone routed to a preamp and ring modulator within the synth. The work’s progression relies entirely on the interaction between semi-random patterns and Anderson’s manual shaping of sounds and cueing of patterns. The music consists entirely of modulated oscillators navigating the stereo field, punctuated by irregular fragments of text that vary in intelligibility.

Available DRAFT releases can be purchased at https://draftrecords.com
Truth will ship November 7th.